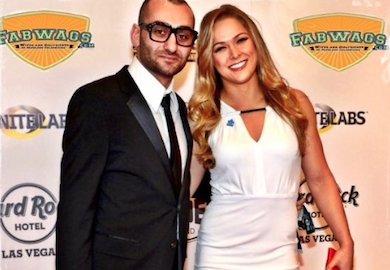 “You can’t even compare that gym to our gym, bro. We’re an established MMA gym and a judo gym for over 20 years. [Glendale Fighting Club] is a college gym that became an MMA gym somehow because Roman Mitichyan, one of our guys, one of my best training partners and friends, was taking judo over there, which is part of mixed martial arts, and they bring Edmund, (who) eats up Ronda’s brain and he does what he has to do and brings Ronda in. I don’t want to say eats up her brain, but kind of gets her (thinking), ‘You’ve got to this standup.’ Ronda likes Armenians; she’s been around us all her life. She joined the [GFC], and it’s helping her out, I guess. I don’t know.”

“Our guys felt a little hurt from her that she’s been a little disrespectful; she thinks she’s big. This is what they say and they think, not me – I could care less. It’s all good between me and her, but the guys, most of the guys, even Gokor, they’re like, all of a sudden she doesn’t train with us. She’ll come by once a year and she has to get dragged there from her mom, like, ‘Oh, just come back and say hi to the guys.’ Now she’s with Glendale. I don’t know what the f–- she does there. She does standup. She does mitt work a little bit, and she might be sparring standup.”

Karo Parisyan recently spilled the beans on the UFC’s bantamweight champion, Ronda Rousey and her relationship with there home gym.

Are the Bellator fighter’s recent comments cause for concern?