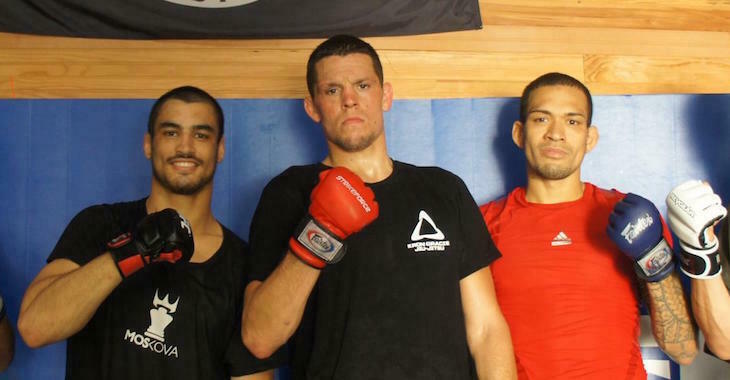 Team Alpha Male Radio returned this week with another episode of the live video podcast. Hosts Justin Buchholz and Chris Carlino AKA Sir Studboy, took calls all night and talked about the hottest topics in MMA.

At one point the Diaz brothers came up in conversation, leading Buchholz to tell the story about the first time he trained with younger brother Nate.

“I was in the gym and I had a fight with somebody important, I can’t remember who, but it was the first time ever sparring with Nate [Diaz] and he came in, and I was doing four 5 minute rounds of boxing sparring only. He’s a really good boxer, he’s like an exhausting boxer. I get in the ring and I’m expecting to do 5 minutes with Nate and then a fresh guy will come I and I’ll do 5 minutes with him. So the first round is crazy, I throw more punches than I’ve ever thrown in my life and he’s just like doing his normal thing you know and the round ends and I look over my shoulder and I think ‘Oh sh*t, this guy’s not getting out, he’s in here to kill me.’ So I’m like oh my god it’s round 2 now, 5 more minutes of this sh*t. We start sparring again and it’s the same sh*t, he’s just slipping outside my cross, grabs me up and just starts upper-cutting me, we’re just fighting in the clinch, all dirty. Five more minutes go by and I’m in fight shape, as far as I’m concerned Nate Diaz just walked in the gym, I don’t even know if he has a fight or whatever.”

“I’m fighting in two weeks and we’re through round 2 and I’m fu*king more tired than I’ve ever been in my life and I look over in my corner again and again he’s not getting out. I’m like holy sh*t dude. I’m like ‘Hey you want another fresh guy to come in,’ he’s like ‘No man I’m cool’. So we go three 5 minute rounds, again, same sh*t, we’re just trying to kill each other.”

“So round 3 ends and round 4 starts, so we spar 20 minutes. I get out of there with my life intact, like I’ve never pushed my cardio so hard in my life. I get done, I’m sitting on the end of the ring and then he walks up to me and is like ‘Hey man you want to do jiu-jitsu?’ I’m like f*ck!”

The segment in question is best told by Justin himself, and we’ve included the clip below: