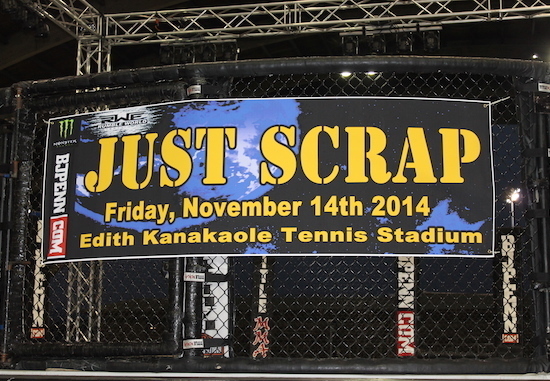 Tonight (Friday), from a packed out Edith Kanaka’ole Tennis Stadium, in Hilo, Hawaii, the JUST SCRAP MMA promotion returned to action with an entertaining night of fights.

The Hawaii vs. Alaska themed fight card showcased both up-and-coming amateur talent, as well as seasoned veterans from the big stage.

In the night’s main event, big show veteran, and local Hilo based fighter, Ross Ebanez had a rough outing, getting stopped by Collin Reuter before the sound of the final bell.  In the night’s co-main event, Strikeforce and EliteXC veteran, Mike Aina brought one home for the local crowd, earning a decision victory over his Alaskan counterpart, Bill Zimmerman.

The full results are as follows: