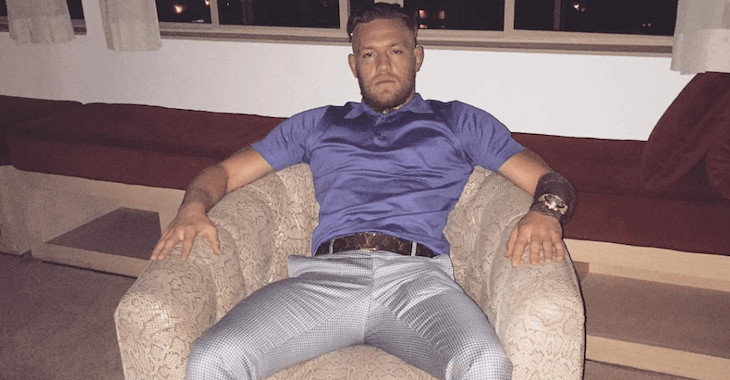 The UFC interim featherweight champ seems to be taking things further and further in that direction. The guy’s always talked a big game, that’s for sure, but now he’s starting to be overly flashy too.

Hey, whatever floats your boat, and if you’ve got the cash I guess you have every right to spend it. But flaunting it is where it becomes a little much.

Mayweather’s known for it. Constantly posting pictures of watches and recently that he purchased a nearly $5M car. Now it looks like McGregor is following the trend, posting his own watch pic and of course there’s the new suits every week and the fancy car he drove into the media luncheon on Wednesday. The guy’s really enjoying his money.

This isn’t a piece to bash the guy, really. It’s just a question that should be addressed, really for a lot of major athletes. We’ve seen sports starts blow all their cash and when they’re retired and away from the game they have nothing.

Anyway, here’s a picture of McGregor giving us the rundown on just how many animals he’s currently wearing and sitting on. Just in case you were wondering.