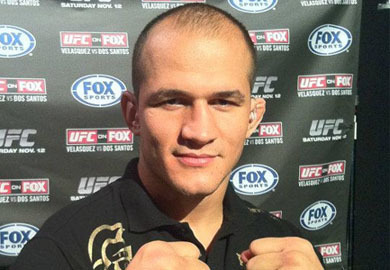 In an interview with UOL Esporte, ‘Cigano’ stated that Cormier will be looking for revenge after he beats Cormier’s friend, Cain Velasquez. This will halt Cormier’s plans to drop to the 205-pound division, nixing a fight with Jones:

“He’s not [dropping to 205 pounds]. And you know why? Because I will defeat Cain, and he will want to fight me.”

Dos Santos is set to face Velasquez in the main event of UFC 166, completing their trilogy which split wins to one a piece. As for Cormier’s next fight, he will occupy the co-main event slot of the same card as he battle Roy Nelson in a heavyweight fight, one that could be his last in the division.

UFC 166 takes place at the Toyota Center in Houston, Texas on October 19th. The event sold out in just three days since tickets went on sale.

For the latest MMA news visit BJPENN.com and thanks to MMAFighting.com for the translation.