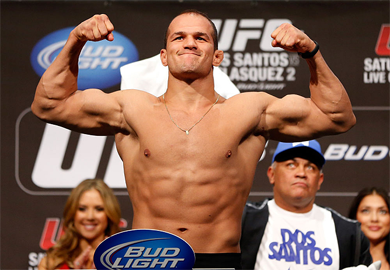 Former UFC heavyweight champion Junior Dos Santos is known for his one punch knockout power, as well as his boxing abilities. However it is no secret that Dos Santos struggles with wrestlers, as seen in his last two fights against Cain Velasquez.

Dos Santos spoke to MMAFighting.com about the holes he sees in his game, including the challenge a fight with Stipe Miocic would bring:

“Miocic is doing a good job, coming off great wins,” dos Santos said. “I was focused on fighting him before, trained for him, so I think it would be a good fight for me. It would be a beautiful fight for the fans as well.”

“I need to become more of a complete fighter to be champion again,” he admits. “I went to Rio de Janeiro for that, and I’m on the right way. A fight between Miocic and I would be really interesting because he’s a wrestler with a good stand-up game, so he would bring a challenge to me as I would bring to him.”