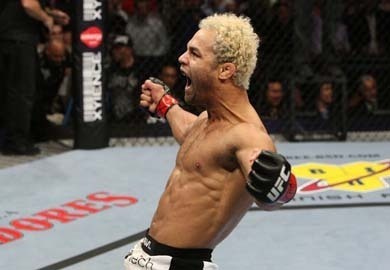 “That is a fight I’ll take all day long,” said Koscheck of the possibility of a clash with Diaz, who is still on a suspension handed down by the Nevada State Athletic Commission following his UFC 143 bout with Carlos Condit in February. “I feel like it’s a great matchup for me and I believe the fans are already on board to see that fight. It is a fight that makes sense and I think maybe Nick Diaz and I should settle it up to see who takes the spot behind the number one contender (Johny Hendricks). I feel it would be a great fight for the fans, with a great build-up, and Nick brings a lot to the table. He’s a good fighter. He’s tough. He has that tenacity where it’s ‘It’s me against the world and %$#$ you!’ I have the same attitude. I enjoy fighting people who have the same attitude because they are going to come in, never give up, and they are going to stand in front of you and fight. Nick Diaz will absolutely do that.”

In a potential matchup between the season one TUF alum and the Stockton “bad boy”, the UFC would have guaranteed fireworks. Both men carry brash personas which have set them apart from the status quo of fan-friendly competitors under the organization’s banner. And while Diaz fights have been typically painted in a “white hat” vs. “black hat” fashion, Koscheck promises it will be nothing of the sort if the two are allowed to throw down.

“It’s going to be bad guy versus bad guy,” Koscheck said. “We haven’t seen too many of those matchups in the UFC. I feel like the Nick Diaz fight needs to happen and I’m pushing for it. I told the UFC that is the fight I want. He’s a guy who supposedly beat Carlos Condit in his eyes and he still feels he can beat Georges St-Pierre.

“He’s tweeting about it and feels he is the number one guy. Well guess what? Don’t be scared homie. I’m waiting for you. I’ve called him out and I haven’t heard him call me out yet. This isn’t personal with Nick Diaz. I see him as a tough fighter and I want to test myself. I want to put myself right back into the mix of things by beating Nick Diaz.”

As Koscheck pushes for a collision with Diaz, the road to recovery will continue. While preparing for a bout with Jake Ellenberger for the ill-fated UFC 151 card, Koscheck suffered a back injury which forced him to the sidelines. The setback not only forced his withdraw from a showdown with “The Juggernaut,” but was severe enough to put him on the shelf for the remainder of the year.

While the situation certainly slowed him down for a bit, as soon as his body began to heal, Koscheck jumped back into the rigors of training. Determination and an unbreakable work ethic set the physical wheels in motion, but the feeling of having something to prove set the motivational fires ablaze.

“I got a lot to prove,” Koscheck said. “There are a lot of people who have doubted me for a long time now. I just have to make up my mind and do it. That is the game plan. I’m coming back and 2013 is going to be my year. People are going to see a different Josh Koscheck. Things are good at my new camp in Fresno. I’m starting to get a lot of guys to come in and train with me full-time. It was a big adjustment period leaving San Jose and AKA. Having to start my own camp and then having a big fight with Johny Hendricks was a lot to deal with. I’m not making any excuses because I was damn ready for Johny Hendricks, but I have established a good base camp in Fresno and things are looking up.

“I have some good young guys in the gym who are hungry young guys. That gives me more motivation, and it drives and pushes me to become a better version of myself. That’s the big thing. I’m trying to become a better me as a fighter. My only goal right now is to become a better fighter and go out there and win. That’s what matters the most for me. I don’t care so much about making money; I care about winning fights. My managers have always told me if I do my job and win fights, they will make me money. That is what I have to do. I have to go out there and win fights.”

Over the course of his career, Koscheck has developed a reputation for being a fighter who is willing to step up in any situation. On multiple occasions during his time in the UFC, the organization has called him to step up on short notice and Koscheck has answered the call proudly.

That particular issue came under heavy fire this past summer during the debacle of UFC 151. For the first time in the Zuffa-era, the UFC was forced to cancel an event due to having the headlining bout on the card fall through. Koscheck has always embraced the “anytime/anywhere” mindset and believes fighters not focusing on what matters the most has resulted in poor decision making.

“The sport is definitely changing,” Koscheck said. “There are so many more shows with FOX, FX, and FUEL coming on board. I try to be ready to fight at all times because I know anything can happen when you have so many events. It’s our job to be in shape and be ready to fight anybody at any time on short notice.

“Opportunities don’t come in life very often and I like to jump on them when they come my way. If I can stay healthy for a whole year straight, I would fight every month if they would let me. That has always been my attitude. The only time I really make a big payday is when I fight and that is what I like to do. I like to go out there and compete, but winning is the most important thing.

“At the end of the day, the money is great, but the one thing that matters is to go out there and get wins. I feel if other fighters had that mentality then the UFC wouldn’t have to cancel a card. I think fighters still need to carry the mentality that they will fight anybody and do whatever they have to do to win. I feel like some fighters, myself included, have gotten away from that at times.

“This is about winning and one of the things Georges St-Pierre does so well is find a way to win. If it’s just wrestling he finds a way. If it’s just striking he finds a way. That is one of the reasons why he has been so successful. He has a game plan, sticks to it, and goes out there and dominates. He wins fights. I feel Georges has done a very good job. It shows because he’s been the champion for a very long time and I think he’s going to continue to be the champion for a lot longer if he continues to fight the way he does.

“I think a lot of fighters go out there thinking they have to be flashy, try for knockouts, and they end up losing. They try to put on exciting fights but at the end of the day it comes down to getting the win.”

While Koscheck has been a staple in the upper tier of the 170-pound weight class for years, the division he is set to return to has taken on a different shape. A new wave of contenders has stormed through and gained a foothold in the rankings, and the five-time fight night bonus award winner is looking forward to knocking them back down the ladder.

“I think this division has always been tough,” Koscheck said. “There is always good competition and a ton of guys who are tough in this weight class. Being one of the best welterweights in the UFC for the past seven years is a good accomplishment, but it’s not what I want. I want to be the number one guy and I’m still working towards it. I still feel like I’m in my prime and have a lot of fights left.

“My last fight with Hendricks was a close fight and now he’s right at the top. I need to make some small improvements in my game plans. I need to add a little more striking, cardio, jiu-jitsu, and get back to old-school wrestling. If I do those things I’m going to be right there in the mix.

“I’m not ready to retire any time soon. I still have a lot of fights left in me and more business things I need to do financially to make sure that some day my kids don’t have to work. My goal is to push myself and build my future right now. In 2013 it starts and hopefully it starts with me whipping Nick Diaz’s ass.”

– Full Write Up At UFC.COM