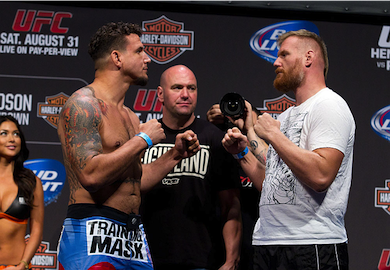 This past Saturday at UFC 164 in Milwaukee, former UFC heavyweight champion Josh Barnett (33-6 MMA, 5-1 UFC) defeated another former UFC champion, Frank Mir (16-8 MMA, 14-8 UFC), when referee Rob Hinds stopped the contest at 1:56 of the first round, due to strikes.

The stoppage was considered by many to be controversial, as a variety of figures including UFC president Dana White said the bout was stopped prematurely.

Frank Mir definitely thought the stoppage was to soon, stating the following:

“You’ve got to let us fight, I didn’t sign up for a tennis match… I think the fans got robbed. I got screwed over.”

Meanwhile, in an interview with the Sherdog Radio Network’s “Beatdown” show, Josh Barnett added his name to the list of people being screwed over:

“I knew that he was right on the edge of being finished even up to 20 seconds before that,” said Barnett. “I could feel it really coming on. I could smell blood. As soon as I hit him with that knee and he just hit the floor, the boost was kicking in. I was just kind of going to absolute rampage all over him, and there was no way he was getting through that.”

“It was only controversial because Hinds stepped in right at the moment, right at the first absolute point he could come in there … to keep him from really getting hurt bad. Frank jumped up and made a huge stink about it, and that’s where the boos came from.”

“It does cheapen the win to some degree, but also what makes it difficult is that he gets up and says what he wants to say and I can’t just slug him and knock him out again. The problem with that is, the repercussions would be bad. I told him, I go, ‘Well, I understand why you’re upset and I’d be mad if I felt it was stopped early too.’ … There was a little understanding on my part, but I was also visibly — I was incredibly upset myself because I felt like I got robbed of the moment. I did all this training. We get in the ring. We’re not there to be friends. I put this man on his face, and all of a sudden all that time spent getting up to this point, I feel like that’s my time. I get to cash in for all the sacrifices I’ve put in … and I get denied.”

“I’m right in the title contention no matter where I’m at. Everybody knows that I can carry the gold.”