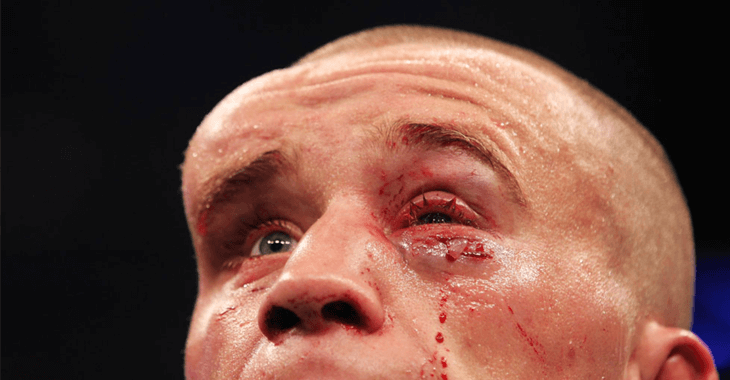 Jose Aldo has tasted defeat just once in his professional MMA career. The UFC featherweight champion has been on a ten-year winning streak and will put that along with his title on the line against Conor McGregor on Dec. 12 in Las Vegas Nevada in the main event of UFC 194.

MMA Fighting’s Shaun Al-Shatti put an epic piece together with Aldo’s past opponents talking about their experience facing “Scarface.”

Urijah Faber: That was actually the most pain I’ve ever been in, because it was all soft tissue.

The ones that landed, it was a different kind of kick than I’d felt before. Normally if you get caught with a kick like that in practice, you stop and, you know, shake it off and get the limp out before you start sparring again. But man, those kicks. We were having a little trouble reaching each other and I think he just decided to use that weapon. And it got nasty, dude. I remember sitting down after the second round having, like, a softball-sized welt right on my knee. I couldn’t bend my knee and I just remember looking down like, holy shit.

Manny Gamburyan: It’s very deceptive. You don’t know if it’s the right hand coming, if it’s the uppercut, jab, or it’s a crazy right leg kick. He freezes you. It’s just the way he fights. It’s his timing. He’s just one second ahead of you.

Mark Hominick: It’s pure Dutch-style kickboxing. He throws that lead hook then the outside low kick. You look at Pedro Rizzo, Marco Ruas, they come from a long list of top strikers with those combinations, the Dutch style.

I’ve been in over 25 kickboxing bouts, over 30 MMA bouts, and I would say that’s the hardest I’ve been hit.

Kenny Florian: I didn’t get full feeling in my legs back for months. He was kicking the inside of my leg, which affected the nerves in my legs so much that it took about a full two months to really get feeling back. It actually [became a game]. I would swipe my hand on the inside of my leg to see if I could feel it, and I just couldn’t feel it. I literally could not feel my fingers rubbing against the skin of my leg because the nerves were dead.

So for two months I would just, like, swipe my leg all the time to see if the nerves were there. Finally, after a couple months, they did come back. But, I mean, it was that kind of power. He not only doesn’t have a tell to his kicks and generates an insane amount of power, but he’s also very fast, and he even keeps the foot pointed. When you keep the foot pointed on a kick, it ensures you want to kick with your shin and not your foot. That’s why it really feels like you’re getting hit with a baseball bat. He doesn’t kick with the foot. He kicks with his shin.

Past opponents all seem to have a few things in common talking about their experience with Aldo. His strength, speed, and power are all things that all these professional veteran fighters feel Aldo posseses a unique edge over all their past opponents.

Are Aldo’s opponents willing to cash in and place their bets on Aldo who is the underdog? Or do they think the mental game of Conor McGregor is playing too much of a factor? We will have to see on Dec. 12!