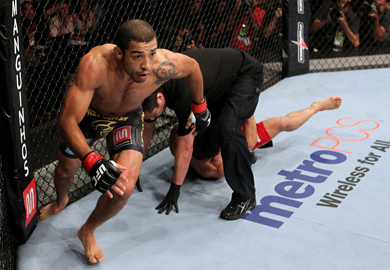 If the Nova Uniao/Team Alpha Male teams needed anymore beef between them, they just got it.

In a recent rant from the UFC’s featherweight champion, Jose Aldo, he goes off on his upcoming opponent, Chad Mendes, in retaliation to his recent comments.

“Maybe I have so many injuries because I’m not taking the same ‘supplements’ you take,” Aldo wrote. “I have injuries because I train a lot to beat you like I did last time, and I think you remember that and still have nightmares about it. I did all the medical exams I had to do, but if you’re a doctor now, I can send them so you can take a look. Maybe you can prescript one of your supplements so I can heal faster.

“The one who gets beat up usually runs away from another beating, but you can’t run forever because I’m going after you. Before the cage is closed you can say whatever you want, because once they close it you won’t be able to open your mouth, so keep talking while you have a mouth. And who are you to say where we are going to fight? I don’t think Dana White would be happy to see someone making his decisions.”
…
“You’re the one who seems to only fight at your home, who desperately doesn’t want to fight in Brazil,” Aldo replied. “I got injured before and my fight with Frankie Edgar was (the fight) moved from Brazil to Las Vegas. I fought your coach (Urijah Faber) in your home (Sacramento), fought at Mark Hominick’s home in front of 55,000 fans, I fought in Japan and Europe. And now you tell me you want to be the champion? A champion doesn’t choose opponents or where the fight is going to be. And now I ask you, who’s the real pu–y?”