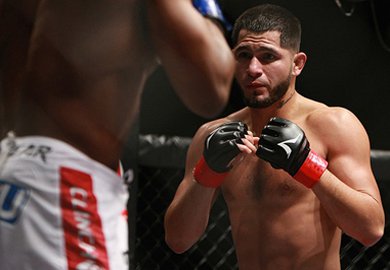 Fight pay has long been scrutinized by fans and fighters alike. Many fans believe that since these fighters are professional athletes, that they are taken care of and live lavish lives, never concerning themselves with the expenses of life. The reality however is a harsh contrast to the conventional thought.

More often than not you hear fighters talk of being behind on payments or just scraping up enough money until their next fight can pay their bills. Fighters like Pat Barry, Tom Lawler, and even top welterweight Jon Fitch have claimed to fight just for the paycheck to avoid more financial woes. Not to say thee fighters are throwing fights by any means but instead just that injury or a rough camp goes out the window come fight time to collect that check and hopefully a win.

One of the most recent cases is that of Strikeforce lightweight, Jorge Masvidal who can’t seem to find a card to be placed on. Strikeforce already has the next two cards almost fully booked yet recent title challenger Masvidal hasn’t claimed a spot on either, though it isn’t due lack of trying.

Recently, Masvidal spoke to MMAWeekly Radio about how he just wants a fight to put food on the table.

Masvidal attempted to remain in good spirits as he joked about a dire situation:

“It’s pretty tough. There’s a busy intersection in Miami and I’ve just been hanging out and I’ve got a sign ‘Will Fight for Food.’ People come by, they pick me up and feed me a couple of cheeseburgers and I just beat up random people, that’s how I’m getting by right now,”.

Masvidal even offered fights at 170-pounds if it meant a fight to support himself and his two children:

At a time where the UFC is filling fight card obligations to Fox, FX, Fuel TV, and putting fights on PPV, it makes the situation more sad that Masvidal can’t get a fight in the parent company of Strikeforce. The problem is however, that he isn’t the only fighter that is dealing with this problem.

Fans and promoters alike are surely waiting for the day that UFC fighters pull in the same paychecks as other professional athletes in a sport that requires the absolute highest level of physical ability and technique as well as natural talent.

Click on this link to listen to the full interview: MMAWeekly Radio

Visit BJPENN.com for all the latest MMA news.