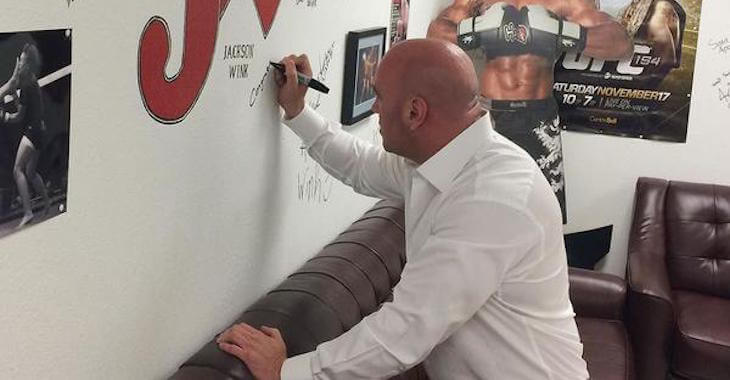 By now you might have heard the news about former UFC champion Jon Jones. The former 205 king appeared in court on Tuesday and left with 18 months of probation and no jail time after pleading guilty to a felony charge. Jones’ legal team was able to get Jones a plea deal and ultimately the judge ruled against any jail time.

The UFC was quick to release a statement, saying that they would review the guilty plea agreement and then discuss his reinstatement.

UFC president Dana White and CEO Lorenzo Fertitta could be seen in the court room during procedures and then, according to the official Twitter account of the JacksonWinkMMA, they both stopped by Jones’ gym afterwards.

It’s very likely they were just there to show support for the fighter, or perhaps it was more official and they are already discussing his return.

When do you think Jones will return to the cage? Should he go ahead and fight the winner of this weekends Daniel Cormier vs. Alexander Gustafsson?

Lorenzo Fertitta @lorenzofertitta just signed The Wall Of Fame. It might be just the the c… http://t.co/YUXGActuI3 pic.twitter.com/7TWmDyoPoh

If doesn't get any more legendary then this. Dana White @danawhiteufc just left his mark o… http://t.co/NHWL2fECbn pic.twitter.com/Tr4BXsL7QD