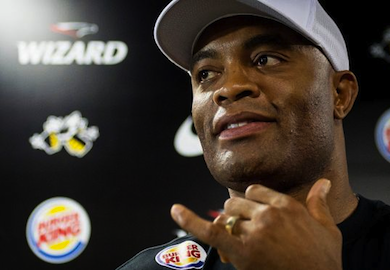 Roy Jones Jr. is one of the all-time greats in the sport of boxing, he has won titles in multiple weight classes and was voted ‘boxer of the decade’ for his dominance throughout the 90′s.

Former UFC middleweight champion and MMA great, Anderson “The Spider” Silva, has been very vocal regarding his aspirations to one day have a boxing match with the 43-year-old Jones Jr. Which is why Roy has decided to take a fight in Moscow so that he can be ready for a Silva crossover collision if and when the Brazilian gets past Chris Weidman at UFC 168 this December (via ESPN):

“I want to be ready for Anderson Silva in case he beats [Chris] Weidman. Silva has made it clear that if he wins, he wants me next. I’m here for him. That’s a fight that intrigues a lot of people, but I can’t fight Anderson Silva coming off such a long layoff. So I needed to get a fight first. If it wasn’t for Anderson Silva calling me out, I wouldn’t be fighting this fight.”

Both Silva and Jones Jr. have been talking about the proposed “Super fight” since 2008. If Silva is to defeat Weidman in their rematch on December 28, there will likely be a trilogy bout. It is more likely that a Jones Jr vs. Anderson Silva boxing match could take place following another loss by “The Spider” to “The All American.”

What do you think Penn Nation? Will we ever see Roy Jones Jr vs. Anderson Silva?