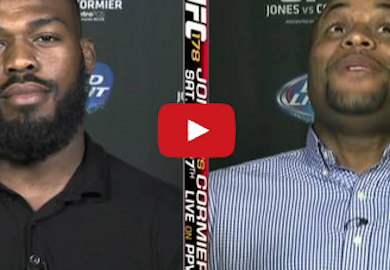 EDIT: The video is back up and live, RIGHT HERE.

Our fun video of Jon Jones and Daniel Cormier arguing off-air has been pulled by the UFC.

Since you can no longer watch it, here’s the transcript word-for-word.

Jones: Hey pussy, are you still there?

Cormier: I’m here. I’m here. You are just the fakest person. I actually admire that you can be this fake, and like, when the TV comes on, you can just change. You’re a chameleon.

Jones: The fact that you’re a pussy hasn’t changed.

Cormier: I wish they would let me next door so I could spit in your f—ing face.

Jones: You know I would absolutely kill you if you ever did something like that, right?

Jones: No, I would literally kill you if you spit in my face.

Jones: I’m not saying I would fight you, I said I would kill you if you did some s–t like that.

Cormier: So Jon, do you think I’m just gonna sit there and let you kill me Jon? I mean really.