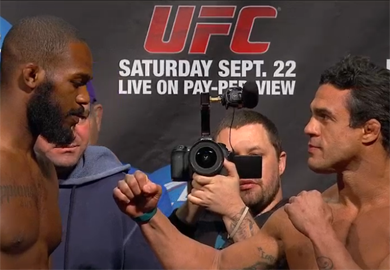 Former foe’s Jon Jones and Vitor Belfort are exploring becoming training partners, and as a result, have a man-date this Friday to see how it goes.

In a recent statement to the Brazilian Media, Jon Jones broke it down:

“I’m planning to train with Vitor on Friday in Miami. I’m meeting him in a private gym, we’ll train together, see if we have good chemistry and maybe we’ll become training partners in the future. I don’t know if he’ll join Jackson’s. He looked for me, called me, said he’d like to train with me. I have to go to Miami on my way to New York City anyway, so I switched my flight to New York City for Friday night, so I can have lunch with him, train, talk to him. We might become training partners in the future.”