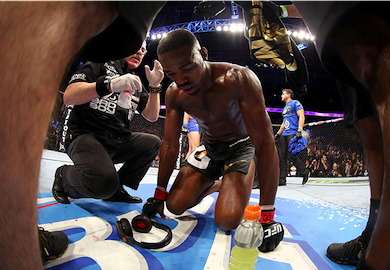 In a piece of light-hearted MMA news, the UFC’s light-heavyweight champion, Jon Jones appeared in the latest issue of GQ magazine. Jones shows off his vest-wearing technique in a six-photo spread.

Jones appears in the magazine wearing high-end clothing and doing a number of random things such as laying on a big tire and eating a burger while standing on the seat as opposed to sitting in it. Jones is known to break the norm in MMA so why not this too.

This adds to his list of accomplishments, along with being the first MMA fighters sponsored by Gatorade and the first to have an international deal with NIKE while also being the youngest UFC champion in history. Jones also holds the record for most title defenses in the division at six.

Whether you love him or hate him, Jones is an undeniable force, at the forefront of MMA’s jump in to mainstream culture that is becoming more prevalent by the day.

Jones isn’t the first fighter to appear in GQ, however, as Vitor Belfort was placed on the cover in an issue of the publication in Brazil.

Regardless of the cheap shots I took before, it is nice to see a fighter on the cover of a magazine dominated by athletes from mainstream sports such as football and basketball, and celerities.

Transcendence is always good to see for a sport that just a decade ago was marred by shortsighted politicians.