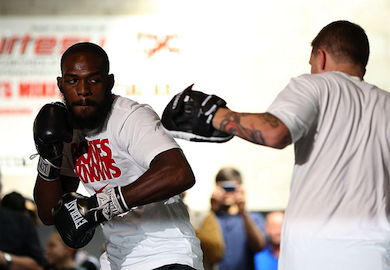 Should he get past Alexander Gustafsson this weekend in the UFC 165 main event, Jon Jones and the UFC will have to find the next suitable title challenger.

Right now, the UFC has stated that Glover Teixeira is next and UFC President Dana White also hinted that Daniel Cormier may be able to jump the line and challenge Jones if he decides to drop down a division.

In a recent interview the UFC champ touched on both these potential threats.

“If you’re a seasoned vet and you said you allowed overconfidence to be your weakness, it’s still a weakness you allowed to happen in the first place. If you have a great opponent and great understanding, then you won’t rush into a guy like Ryan Bader who is obviously going to swing looping punches at you. I don’t think he’s the guy who’s going to beat me.”

“To be honest with you, I don’t think Daniel Cormier really deserves a big fight. I don’t respect him as a person. I think fighting me would be an opportunity of a lifetime for him. I don’t think I have much to gain from beating Daniel Cormier because no one knows who he is, and he hasn’t really proved much.

He seems to really not like me and be a big hater of mine. It’s sad, considering we’re both African-American and there’s not many of us in the sport. We should try to find a common bond. We don’t need to be friends, but we should at least respect each other. It’s pathetic that me and Rashad have such a bad relationship and me and Daniel have such a bad relationship.”