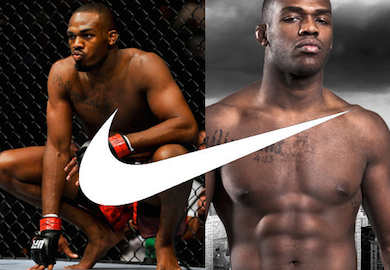 “I saw that: ‘Technically, you lied under oath. I didn’t. I had several months left on the Nike contract, and when that fight happened, it sped up the process of my losing my Nike deal. I had like thousands of dollars of credit left on my Nike account that I never got to spend and several months of monthly revenue, money, that I never got to receive – monthly money that I didn’t get to receive. So I lost thousands of dollars because of that fight. Technically, that fight was the reason for thousands of dollars being out of my bank that I could have received. So, I mean, technically they have nothing to come back on me for.”

During today’s UFC media workout, Jon Jones discussed the recent allegations that he lied under oath regarding his dropped Nike endorsement.

The champ, who is now signed by Reebok, found himself under the microscope after making contradicting comments regarding the departure of his Nike sponsorship.