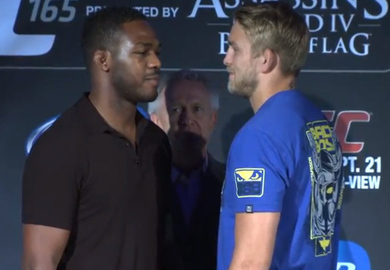 UFC light-heavyweight champion, Jon Jones has often hinted to an eventual move to the heavyweight division once he has adequately cleared out his current division of potential challengers. Jones has warned that he still has a lot to prove stating that fellow 205-pounder Glover Teixeira is someone who he is looking forward to fighting.

Although a move to heavyweight will likely result in an immediate title shot if Jones is coming off of a win, UFC heavyweight Daniel Cormier has other plans.

Cormier has repeatedly went to Twitter to antagonize Jones and vice versa.

The 26-year old Jones while focusing on his next title defense against Alexander Gustafsson, has put a stop to the talks of a fight with Cormier as he recently stated on the UFC World Tour that Cormier isn’t much of a real threat:

“He’s trying to get his Twitter followers up,” Jones said. “That’s about it.”

Jones seems to believe that a fight with Cormier has no benefit for him as he holds a UFC belt and Cormier has fought just once inside the Octagon:

“I hate answering questions about him,” Jones said. “He’s just not relevant to me. There’s so many great fighters in the light-heavyweight division. He’s not even top five in his division. I’m not sure if he is.”

Jones went on to bash Cormier on what he thinks was a poor performance against Frank Mir earlier this year. Cormier won the fight which was largely uneventful, and will next face Roy Nelson:

“He has, like, 20,000 Twitter followers. He has short reach, bad cardio (and) he looked terrible in his last fight. It’s like, I’m not worried about him at all.”

The two may never fight in the Octagon although they have nearly come to blows outside of a sanctioned bout:

“[Cormier] had an altercation with me,” Jones said. “I don’t even know who him and his friend was at the time. Obviously, if they’re doing interviews about it, it’s a bigger deal to them than it ever was to me, and ever will be to me.”

Jones will next take on Alexander Gustafsson at UFC 165 in a bout that has widely been dubbed his toughest challenge to date. UFC 165 takes place at the Air Canada Centre in Toronto, Ontario, Canada on September 21st.