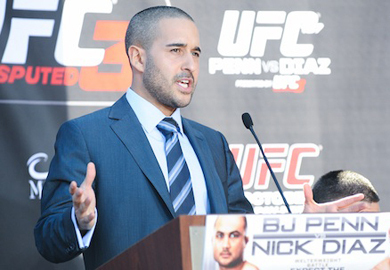 Anik broke the news on The MMA Hour, and explained his contract saying:

“I am sticking around. I’ve signed an extension with the UFC. Hopefully they’ll sign it and mail it back to me pretty soon. Anyone who knows me knows that this is the job I’ve wanted for a long time. The bottom line, Ariel, I’m not a lifelong martial artist, but that doesn’t change that this is my passion, that this is my favorite sport and that this is what I want to do with my life. I left ESPN honestly hoping to do this job for 20, 25 years. I guess signing an extension here is a big moment for me and hopefully the second of many contracts with the UFC. No, this is not a Chris Fowler, 10-year, $35 million dollar deal either, but it’s a longer term, certainly longer than two years, which I think sometimes can be a standard contract in the broadcasting world. It’ll be pretty much a similar role. I’ll probably do 20 to 22 live events per year. I imagine Ultimate Insider will continue to be part of it in some capacity. I continue to campaign for them to bring The Ultimate Fighter back to a live format, but it doesn’t look like that’s going to happen.”