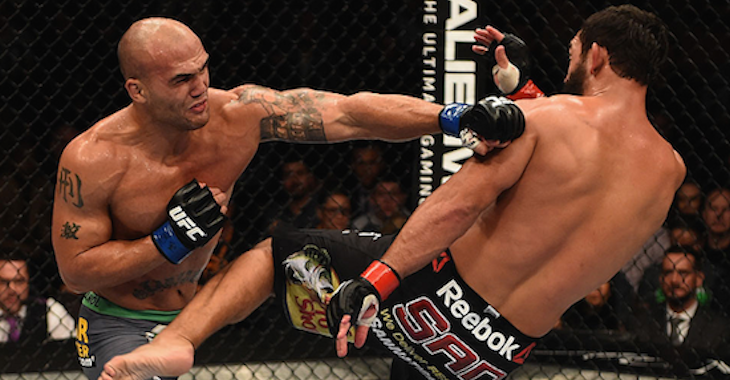 Former UFC welterweight champion Johny Hendricks was a guest on Submission Radio and talked about his fights with current champ Robbie Lawler, GSP and gave his prediction for the upcoming title fight between Lawler and Rory McDonald. Check out what he had to say.

“The first fight [between Lawler and McDonald] was close. It was closer than I remember, because every time I looked up I hear the crowd yelling and I was like ‘oh man’. At first I was like ‘oh man, Robbie Lawler really took it to Rory MacDonald’, and then I re-watched it. I thought it was a lot closer than before. I still think Lawler won, but I think it was a lot closer than I even gave credit to him. Because you know, I’m in the back warming up – but this fight I think Rory MacDonald.

“He’s got great coaches, he’s going to figure out a way. They’re game-planners. They’re guys that are going to do this, this, and this, and they’re going to make sure that everything runs to a ‘T’, and so this one I’m actually sort of excited to see, because Robbie Lawler. you can never count him out of a fight, because no matter what you do he seems like he’s always in it. So this is a fight that’s going to be, can Robbie Lawler walk him down and land that punch? Or can Rory MacDonald keep him at bay, keep him at distance and get the win?”