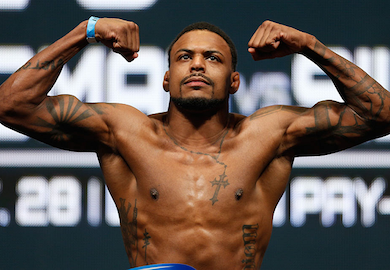 As a replacement for Ross Pearson, UFC lightweight fighter, Michael Johnson will look to continue his rise through the UFC ranks with a UFC Fight Night 37 booking against Melvin Guillard.

Johnson was hoping for a top-10 opponent the likes of, Khabib Nurmagomedov, but will settle in for his former Blackzilian teammate, Guillard, instead.

Guillard, a known knockout artist, is a more dangerous opponent than Khabib, according to Johnson’s latest interview with MMajunkie.com.

“Melvin’s still dangerous, he’s still one of the best guys in the division. He’s been around for a while, and it’s just another fight that interests me. To tell you the truth, this is a more of a tricky and more of a dangerous fight than Khabib. Khabib doesn’t have knockout power, and Melvin does.”

“I would think he wants it a little more, he’s a little more hungry. He’s trying to get back to where he was not too long ago, and now he’s got to go through me to get to that.”