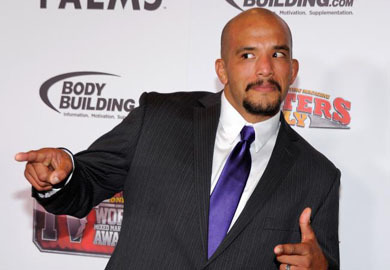 After making drop to light-heavyweight, Joey Beltran looked to restart his career in a new division. Upon his return to the UFC, Beltran split two consecutive fights, winning his most recent against Igor Pokrajac. His victory was taken from him, however, after Beltran tested positive for nandrolone.

Now, with a fight against Fabio Maldonado looming, Beltran opens up about his suspension and returning to the sport he makes a living off of (via HOF-MMA.com):

“I’m still pretty bummed about the Igor Pokrajac fight. I got that stupid positive test and to this day, I have no idea why. If you look at my physique it’s pretty clear I have no idea what Nandrolone or Deca is. I dealt with that 9 month suspension by becoming hungrier and working on my technique.”

About supplements and the hidden ingredients associated with them:

“I did it totally different for his fight. I took no supplements at all, aside from protein shakes. It sucks because you walk that fine line trying to improve your performance and find stuff on the internet that is legal today, but illegal in 2 weeks. These companies aren’t regulated by the FDA. So they say there is baking soda in it but really it is human growth hormones.

I’ve moved on and am just ready to scrap. This suspension has just become another part of my journey now. I was complaining a lot about fighting, when I was fighting. The suspension may have been God’s way of saying, “Oh you don’t like it? Well, now you aren’t going to fight for 9 months. How do you like that buddy?”

I was forced to sit back and look at my career. I haven’t held any major title or even put together a decent win streak in the UFC. But, I’m comparing myself to the highest level of fighters in the world. The highest level of martial arts in the world and then there’s chubby little Mexican Joey Beltran; and I’ve been hanging with these guys for 4 years now. So, I realize that I’m doing alright. I just need to be comfortable with what I do. I don’t care if you are a Karate guy, Jiu Jitsu master, or wrestler; I’m going to grab a hold of you and punch you in the face until the ref stops it or time runs out. That’s what I’m going to do.”