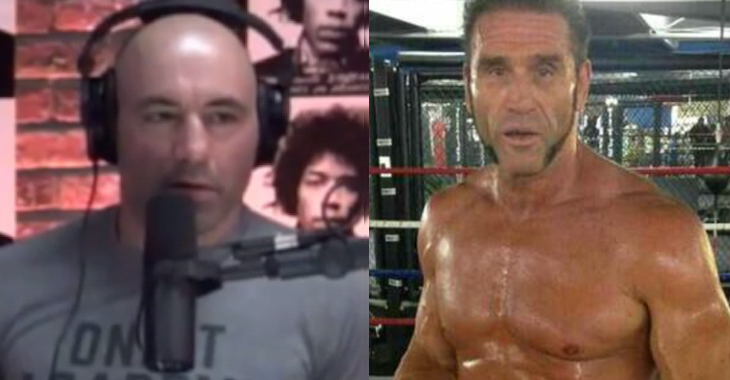 Joe Rogan recently came out and stated that he thought the fight between Ken Shamrock and Kimbo Slice at Bellator 138 earlier in June looked “fake as f***“. While the fight did look quite bizarre, Shamrock vowed on his life that the fight was far from staged.

“I swear on everything that I love, my family, my God, that fight was not fixed,” Shamrock told Submission Radio. “The people that are saying that are angry because they lost a bet or are just being hurtful.

“Why in the world would someone in Joe Rogan’s position spout off with something like that when there’s no proof?” Shamrock continued. “It’s the speculation of his thoughts that could literally ruin someone’s career. That’s like me going out there and telling his wife that he cheated on her. That I don’t have any proof but someone just said something.”

Joe Rogan, a UFC commentator, shared his opinion on one of his fight companion podcasts. Shamrock believes that since Rogan is in so many people’s ears as a comedian, commentator and podcast host, it is Rogan’s responsibility to make sure he only states the facts.

“You have the peoples’ ear,” said Shamrock. “You have a responsibility to make sure that whatever you say, you can back up. Not just say it because you think it. You ruin peoples’ lives on something he has no proof. He’s wrong, what he said. He could have ruined my career and my life. What he’s saying? There’s no proof to it.”

“A lot of these people saying the fight was fixed said I should have never been in the ring. ‘I’m 51, too old. I can’t compete at that age.’ Now they’re saying there’s no way I could have lost. I’m really confused. One minute I can’t fight, the next thing, I can’t lose. Make up your mind.”