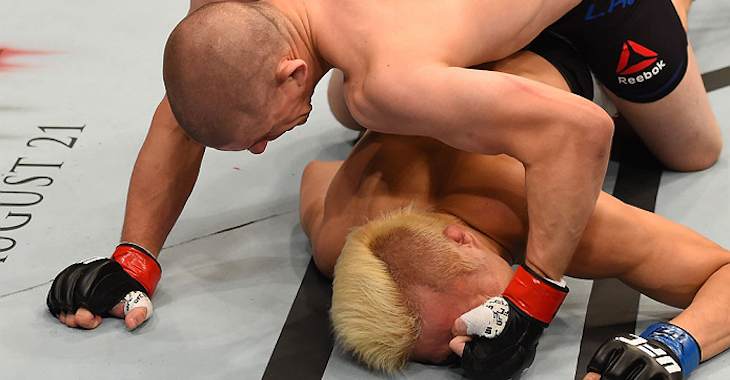 Joe Lauzon reminded everybody why he is one of the most popular fighters in the UFC with his class-act performance against Takanori Gomi last night at “UFC on FOX 16”.

In what could have once been considered as a “dream fight”, Gomi blasted Lauzon with some of his best shots before the fight was taken to the ground. From that point on, Lauzon was in full control and was in position to end the fight a couple times by way of submission. Instead, Lauzon took the back of a flattened out Gomi and blasted him with some heavy shots.

“I hit him good a couple times,” Lauzon said during the post fight press conference. “When I had his back, I spread him out and I think I tore something in his groin or something. He was fighting pretty hard, and then he let out like a squeal. And then he completely went flat.”

Herb Dean stood by as Lauzon continued to land shots on an unresponsive Gomi. Eventually, Lauzon had decided himself that Gomi had enough and walked away from the fight, essentially waving it off himself.

“I felt like I had taken the life out of him. I hit him a couple times, and I thought he was unconscious. He looked out,” Lauzon said. “Herb Dean was right there. I figured if he’s unconscious, I figured I’d just beat him to putting his hands on me and I walked away. He looked at him and was checking him out, and I was like, ‘He’s not going to stop this.’ So then I started to run over, but before I got there, he waved me off.

Should this victory boost Joe Lauzon further up in the rankings? Who’s next for “J-Lau”? Share your thoughts in the comment section below!