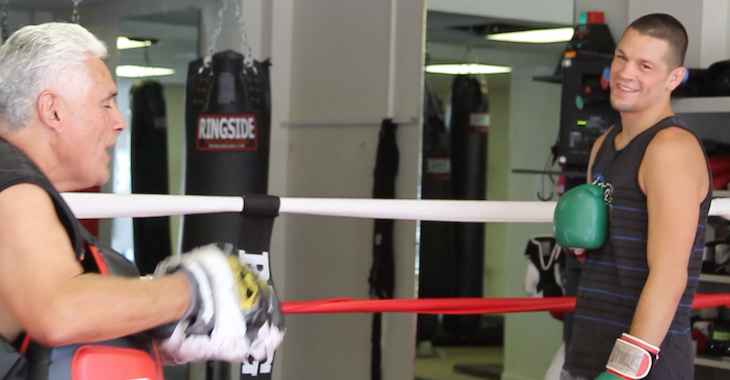 Will we ever see Joe Lauzon face off with Nate Diaz in the octagon? If Lauzon had his way, than no.

The fifth season of TUF featured both men but they have managed to not meet up in the cage. Lauzon is happy about that and hopes it doesn’t change. At a recent Q&A, a fan asked Lauzon a question and said that they had asked Diaz why the two haven’t fought and Diaz’s response was that he liked Lauzon too much. J-Lau, he’s got nothing but love as well.

“I also love Nate. I think it’s kind of a natural thing that we’ll probably fight at some point, maybe. But I would always try to fight someone else before I fought Nate. Just because I like Nate a lot. It would probably be an exciting fight, but I like Nate too much.”

“I love Nate Diaz. We were both on [The Ultimate Fighter] together. We were on opposite teams. He actually arm-locked me the very first day for the tryouts. The tryouts were to pick teams and I got matched up with Nate. I hadn’t done jiu jitsu in two months because my brother, we don’t get along so well sometimes, we were doing kickboxing sparring and he double-legged me through the ropes into a hard piece of metal.

“I had a huge lump and I couldn’t do anything off my back for two months. So the first day, it’s the first time I’ve done any sort of jiu jitsu and of course I’m paired up with Nate and he arm-locks me right off the bat. It was such a nice arm lock.”

Sounds like they’ve got a mutual respect and friendship, hopefully they never have to scrap in the octagon.