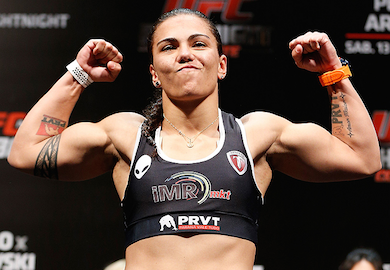 Jessica Andrade learned that Ronda Rousey watched her fight at UFC Fight Night 51 in Brazil against Larissa Pacheco. The fight ended in the first round when Andrade caught Pacheco in a guillotine choke.

Andrade spoke with media members after the fight, saying that while she is interested in a fight with Rousey, she isn’t in any rush to challenge the 135 pound champ.

“I was very happy when they told me she waited to watch my fight. I think there needs to be that mutual respect, to enjoy watching opponents fight. And I think she watched also because she thinks in the future that she could face me. But I’m not ready yet to fight her. I want a fight with her being much more prepared, maybe a year-and-a-half or two years.”

Andrade says that when she is ready to challenge Rousey, the pair will put on a great fight that will last longer than Rousey’s match against Alexis Davis.

“I will be very well prepared to get in there and have a great fight with her. At least get through the first 20 seconds.”