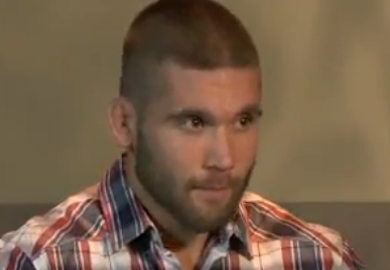 UFC featherweight Jeremy ‘Lil Heathen’ Stephens was promised a title shot by UFC Officials should he defeat Cub Swanson this Saturday at UFC Fight Night 44: Swanson vs. Stephens. Prior to this announcement Dana White confirmed with MMAJunkie.com that the winner of the bout will “probably” get a title shot.

Lil Heathen spoke to MMAJunkie.com about his upcoming bout with Swanson.

“I’ve been told that (the winner gets a title shot), but nothing’s ever for sure,” Stephens told MMAjunkie. “It’s all based on performance, but with this fight matchup, I don’t think performance is going to be much of a disappointment.

“I think this fight just screams ‘Performance’ and ‘Fight of the Night’ and probably ‘Fight of the Year’ all over it. I think both of our styles match up in that particular manner. We’re going to go in there, and we’re going to slug it out.”

Stephens found a resurgence in his career after dropping down to featherweight after three straight losses in the lightweight division. Since making the drop to 145, Stephens has gone a perfect 4-0.

“It’s not just the weight cut,” he said. “It’s all the hard work and dedication and persistence that I’ve been putting in. Even in my down time in the rough couple outings I had at 155, there was a lot of progress in the gym, and I just kind of carried that through and really believed in myself.

“I made the changes, made the cut and reset goals for myself at 145 pounds.”