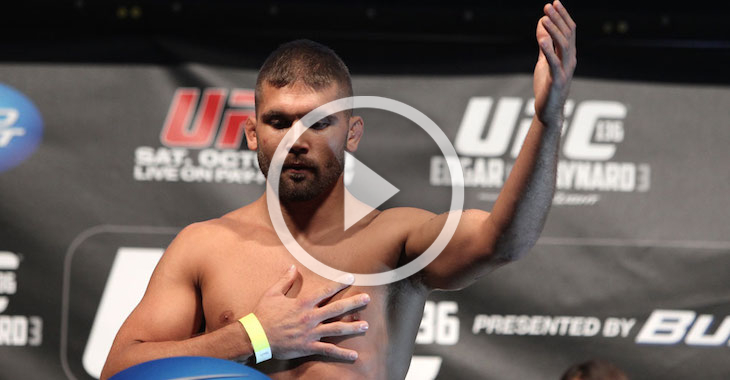 Jeremy Stephens made an impactful return to the octagon at the biggest event of the year when he knocked out Dennis Bermudez with a highlight reel flying knee. The amazing finish would have likely earned him a performance of the night bonus had he not missed weight the day before.

The lightweight turned featherweight has never had an issue with missing weight before. Stephens walked onto the scales knowing he would miss weight and chalked it up to poor planning. He vows it was a mistake that will never happen again.

“I’ve been in this business for a long time. In the UFC, this is the first time it’s ever happened and the last time that it’s ever going to happen.” Stephens told BJPENN.COM Radio.

“I thought I was going to be fine. I cut out my water a little bit too soon and I paid the price for it. I manned up and had to give away my purse. I didn’t want to make myself too sick to the point where I wasn’t going to fight, you know? I wanted everybody to see a great fight and I had to do it healthy so I can make it in there and earn my pay day.”

Both Stephens and his opponent Dennis Bermudez earned their pay days that night. The two featherweights would have stolen the show if it wasn’t for Robbie Lawler’s defense against Rory MacDonald.

Stephens’ performance caused his stock to rise despite missing weight, and it’s a mistake he promises to never make again.

“I apologize for [missing weight]. I took money out of my kids’ mouth, basically. That was a hard one to swallow. But it was a first time and last time mistake.”