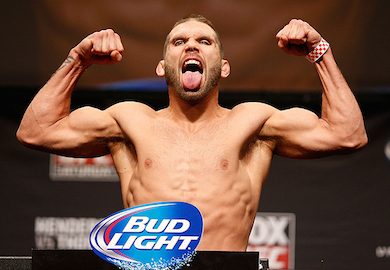 UFC President Dana White has stated that the winner of the Swanson vs. Stephens bout will “probably” receive the next title shot at 145-pounds.

“Lil Heathen” was apparently told the same by UFC officials, as he told MMAJunkie in a recent interview:

“I’ve been told that (the winner gets a title shot), but nothing’s ever for sure,” Stephens said. “It’s all based on performance, but with this fight matchup, I don’t think performance is going to be much of a disappointment.”

“I think this fight just screams ‘Performance’ and ‘Fight of the Night’ and probably ‘Fight of the Year’ all over it. I think both of our styles match up in that particular manner. We’re going to go in there, and we’re going to slug it out.”

Since dropping down from the UFC’s lightweight division to 145-pounds, Stephens has gone a perfect 3-0 scoring wins over Estevan Payan, Rony Jason and most recently Darren Elkins.

Do you think Stephens deserves a featherweight title shot if he can pick up a win over Swanson this Saturday night? Sound off Penn Nation!