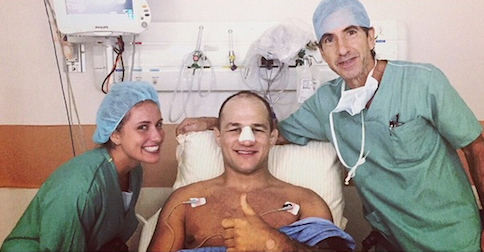 Former UFC heavyweight champion Junior dos Santos has been roughed up in has last couple of outings.

Though victorious, Brazil’s former champ was in need of some body repairs.

“I would like to let you know that I just had a knee and nose surgery and that went very well,” dos Santos posted on his Instagram. “There are some people that a simple thank you doesn’t seem to be enough to show them how thankful you are for their help. But I still want to give a special thank to doctor Moisés Cohen and his crew who one more time are taking care of me and doctor Sergio Miranda and his crew who did my nose surgery and his daughter Maria Vitoria. Thank you!”