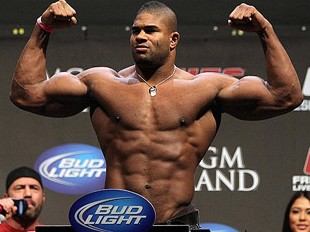 “I prefer to fight against clean athletes and real professionals. Cain is one of these guys. He’s a real professional fighter and that’s a good challenge for me. I know he’s very tough and I know how hard I have to train to face him. The other guys, they just say things but there’s nothing behind the words. Guys like me and Cain Velasquez, we are made at the gym. And guys like the other guy, they are made at the laboratory.”