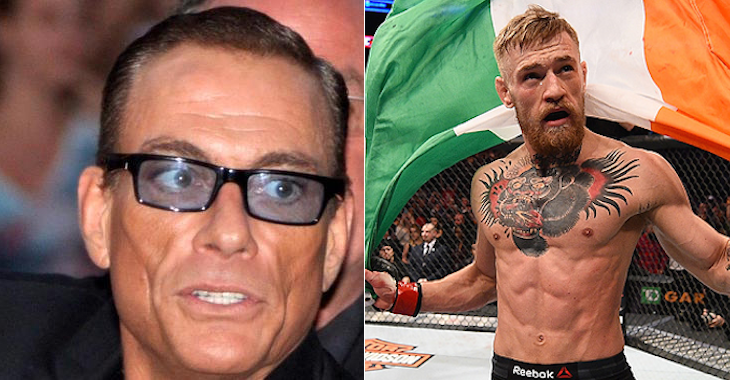 UFC Featherweight Conor McGregor is no stranger to theatrics. Not only does McGregor have the ability to talk fans into the arena with his trash talk of his opponents, but he can back it up, too. Jean Claude Van Damme is a fan of the Irish-born fighter and believes that, like Rousey, McGregor could make the transition to Hollywood very easily.

“McGregor is always going to be moving a step forward,” Van Damme told Bruce Buffer on his podcast, “It’s Time!“. “He likes to elevate himself in fighting, philosophy, he’s reading books, he’s trying to learn his way. He’s not stupid. He has to do what he has to do. He’s a good guy. He loves people. Him being a movie star is really a true warrior. He’ll make a film or two or three, for sure, because he wants to touch everything. In his heart he’s a true warrior.”

While McGregor no doubt has the potential to become a star in Hollywood action movies, Van Damme also believes he has the ability to dethrone Jose Aldo at UFC 189 when they meet in Las Vegas.

“It’s going to be hard to beat [McGregor] because he’s fighting with this, plus the techniques and his height. Plus he’s got the Irish people behind him and he created a connection between him and the audience of his early fights and he wants to be loved.”

While Van Damme believes McGregor will be difficult to beat, he also understands both men are at the top of their game and the fight could go either way. However, he also thinks McGregor has a striking advantage over most of the opponents he steps into the octagon with.

“To be honest with you, I love McGregor and I love Aldo. Those two guys, you’ve got a Lamborghini and a Ferrari. You’ve got the guy from the street. He’s strong, all over the place. Not in a bad way. Like a monkey. Bam bam, he’s all over the place. He’s fast. He goes forward. He’s imprevisible… McGregor has one thing nobody has in his division. He can go backwards as the same time he’s hitting. When a guy runs at him and he can go backwards and he’s hitting the guy. It’s very dangerous. He’s got the length to go forward and the technique to go backwards.”

Who do you think will come out on top? Do you want to see Conor McGregor in some movies? Share your thoughts in the comment section below!