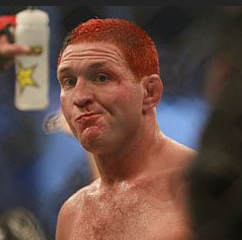 By Evan Stoumbelis
Former UFC Middleweight and former Bully Beatdown host Jason ‘Mayhem’ Miller has been charged with misdemeanor vandalism after breaking into a church and reportedly spraying a fire extinguisher around the building before taking a nap on a couch on the second floor while wearing absolutely nothing. Mayhem has been accused of doing over $400 in damage, including smashing a window. Spokeswoman for the district attorney Farrah Emami said Mayhem faces up to a year in jail if convicted. Orange County officials found the first floor of the church covered with broken pictures, CD’s, books and spray from a fire extinguisher which led them to a naked Miller taking a nap on a second floor couch. Mayhem tweeted about the incident saying the incident “wasn’t a cry for attention, personal glory, or monetary gain.” days later Miller also tweeted saying “I did some socially unacceptable things last Sunday, that, for some reason has got some of you to hate me, even though at one time you loved. I am safe, with people that love me, and hope that you will join me, if I ever hurt anone, I am sorry.”