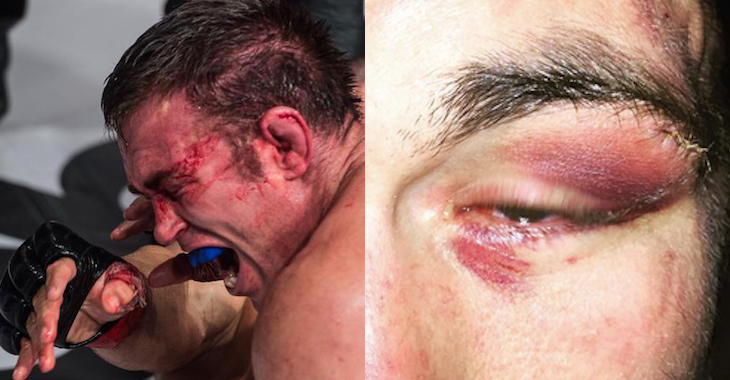 Rousimar Palhares may be in hot water for holding on to the fight-ending submission hold on Jake Shields too long at “WSOF 22”, but that’s not the only thing he should be in trouble for.

“Over and over, he kept catching his thumb and digging it in both of my eyes. Over and over,” Shields told MMA Fighting. The two met in the main event of Saturday’s card in Las Vegas to decide the fate of the WSOF Welterweight Championship. The two set a grueling pace for two rounds until Shields was caught in a kimura in the third round. Shields was poked in the eye several times throughout the fight, but referee Steve Mazzagatti did nothing about it.

“I kept telling Mazzagatti, ‘hey, look, the eye gouges.’ He wasn’t saying anything about it. It wasn’t once or twice. It was at least eight times. In over 40 fights, not one time has anyone ever done that to me. Those weren’t, like, semi-eyepokes. Those were blatant dig in and try to gouge.”

Steve Bauzen captured the aftermath of one of the eye pokes in the picture below:

Here’s a photo of Jake following one of the worse eye gouges. pic.twitter.com/ns4rDVuIqO

consequences of two pieces of shit : mazzagatte and pahalares should both be banned from professional sports- @jakeshields victim of eye gouging ! Now you all understand why i charged the cage ! @brendanschaub @karynbryant @wsof @gilbertmelendez @ramseynijem

Does Rousimar Palhares deserve to be stripped of the title, or were the eye pokes accidental? Share your thoughts in the comment section below!