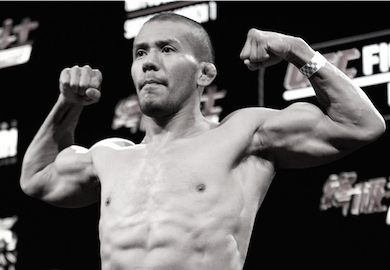 Another casualty of the UFC’s continually moving roster has been suffered in the form of featherweight fighter, Ivan Menjivar.

The TriStar trained athlete dropped three straight bouts, during what was his second stint in the UFC, and that was all the UFC brass needed to see.

His release marks the second high-profile termination in the last 24-hours. The first of which was UFC lightweight, Melvin Guillard.

Menjivar’s losing streak started back at UFC 157 when he was choked into submission by Urijah Faber. He followed up that defeat with a decision losses to Wilson Reis last September and Hatsu Hioki earlier this month.

Overall Ivan went an even 4-4 in his latest stint with the UFC. If you include his 2004 bout with Matt Serra, his overall UFC record is 4-5.

It’s rare the UFC stops at just two-fighters during a releasing spree. There are likely more to come, stay tuned to BJPENN.COM.