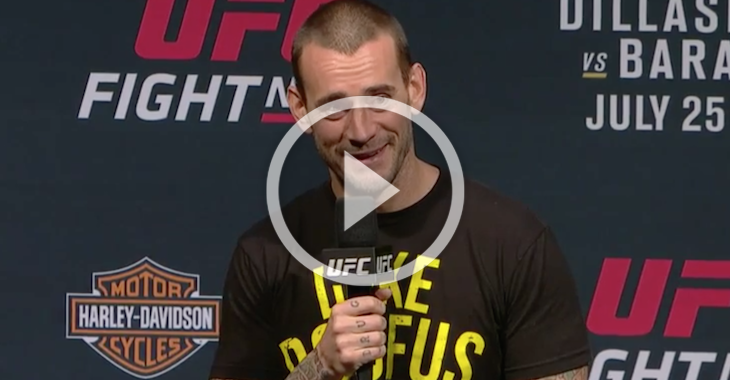 UFC made several decisions toward the end of 2014 that left fans and fighters of the sport scratching their head, one of which being the signing of former WWE Superstar Phil “CM Punk” Brooks. Punk doesn’t have a single professional fight to his name, yet his fame from professional wrestling allowed him to sign with the best fight promotion in the world and skip the process of “paying his dues”.

On one hand, Punk has paid his dues in the form of his career in professional wrestling. He toured the independent circuit and got paid in hot dogs to wrestle in front of fifty fans to earn the fame he has today. On the other hand, that fame has nothing to do with the sport of mixed martial arts and some fighters feel it’s a slap in the face when he gets a lucrative contract with the most prestigious league in the world. Team Alpha Male’s Justin Buchholz wasn’t the least bit impressed with the footage he has seen of the former WWE champion and feels fans’ comparisons of Punk to Lesnar are insane.

“CM Punk man, he needs to fight soon. The difference between him and the most famous WWE wrestler that fought in MMA, Brock Lesnar, is that Brock Lesnar was a [NCAA] National Champion/physical f*****g specimen, you know? He’s a monster! CM Punk does not have any athletic background and he’s an actor, you know?”

Punk trained a bit of BJJ while on the road with the WWE, but his athletic MMA-related background pales in comparison to the most basic of amateur fighters. Punk was taken under the wing of Duke Rufus who he has been training with for the past few months with the likes of Ben Askren and Anthony Pettis.

Fans believe he will improve greatly under the tutelage of Rufus, but Buchholz argues that as well. “To think that he’s going to improve is a fallacy. I think he can get a little bit better but in this time frame? It’s just not going to happen.”

“The odds are against him, but everyone likes an underdog story and if he can pull something off? Man, that’d be pretty spectacular. But, it’s hard not to root against him as a fighter…”

Make sure to come back at 8:00 PM PT tonight to catch the newest episode of Stud Show Radio, LIVE!