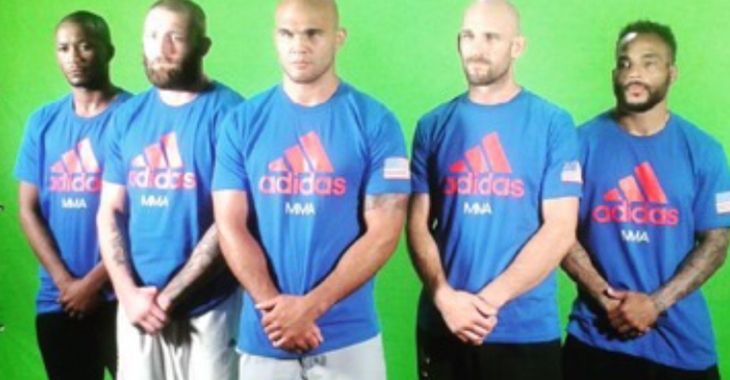 Yes, it is. In fact those are new ‘Adidas-made Fight Kits’. Are you confused, I can see why you wold be. You have the UFC (Reebok sponsored) welterweight champion standing and posing with new Adidas fight gear on. Oh and this photo shoot is for RFA, an MMA origination run by Ed Soares, who’s best known for being Anderson Silva’s manager, friend and translator.

Is your mind hurting? Well chill out, it’s all good. Lawler isn’t jumping ship or going against the UFC. He’s simply the team captain for USA, during RFA’s ‘USA vs. Brazil’ event which takes place on Friday night. It is funny though, to see a UFC champion rocking Adidas fight gear. But, lets remember that the UFC fighters can wear whatever they want when it’s not fight week for them. Lawlers there to be the countries coach and  to show support for his team ATT. Apparently, Adidas rolled out these exclusive ‘country’ fight kits for this event, but as of now, have no plans to make it a permeant mainstay for RFA. What do you think of them though? Another interesting note, the fighters are able to put their sponsors on the fit in order to get their sponsorship money as usual, but won’t be getting paid from Adidas for wearing the gear.

What looks better….Reebok or Adidas??