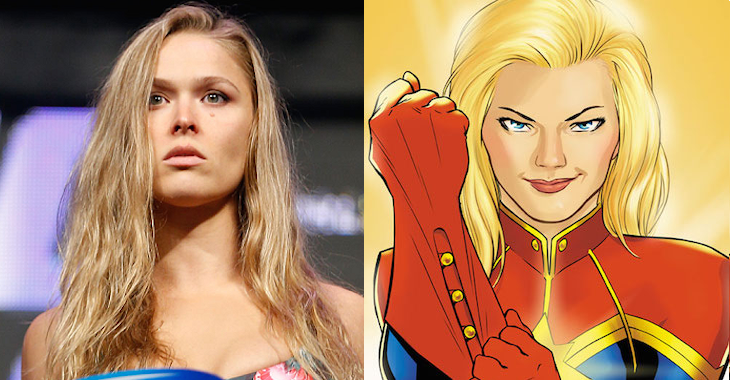 Men and women around the world already look up to Ronda Rousey as if she were a real life super-hero. Her thirty-four second victory over Bethe Correia at “UFC 190” catapulted her into superstar status and she was the talk of mainstream media for weeks. Now that the dust has settled, Rousey has expressed some interest in making Hollywood headlines by landing a role as Captain Marvel in an upcoming Marvel film!

“Well, a lot of the good ones have been taken, but I’d like to vie for Ms. Marvel,” Rousey stated during an Q&A session on Reddit.

Marvel recently announced their plans to release a “Captain Marvel” movie in 2018 and Rousey could be the perfect candidate. She has an uncanny resemblance to Carol Danvers, the lady behind the mask of Captain Marvel. Do you think she has the skills to assume the role? Check out some fan art that Rousey shared of her in the Captain Marvel gear!

Since the reddit AMA I’ve received so many badass Ms. Marvel/Captain Marvel edits! There were so many cool ones I couldn’t pick just one to share –
here’s 1 series of 2
Big thank you to contributing artists:
@bosslogix (two on right) and @salman.artworks (left)

Since the reddit AMA I’ve received so many badass Ms. Marvel/Captain Marvel edits! There were so many cool ones I couldn’t pick just one to share – here’s 2 series of 2 Big thank you to contributing artists: @alexmurilloart (right) and whoever did the art on the left (sorry I can’t find the original

If Rousey were to land the gig as Captain Marvel, do you think there would have to be an interim title created in her absence? Share your thoughts in the comment section below!