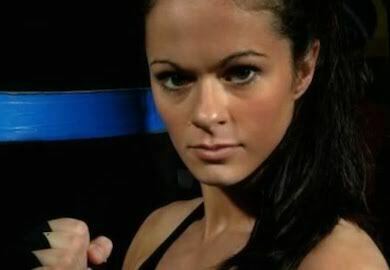 The UFC will be streaming Invicta FC’s next event on their internet subscription service, Fight Pass. That takes place on Sept. 6 at Municipal Auditorium in Kansas City, Mo. This is the first of many Invicta events that will air on Fight Pass. The card will feature 3 title fights. The main event will be an atomweight (105) title fight between champion Michelle Waterson and challenger Yasiko Tamada. Also on the card are title fights in the strawweight (115) and bantamweight (135) divisions.

In the strawweight title fight, former XFC champion Stephanie Eggink (4-1) will take on Katja Kankaanpaa (9-1-1) for the currently vacant title.

I was fortunate enough to get the opportunity to talk to Eggink before her upcoming title fight.

Part 1- Who is Stephanie Eggink?

Q: Where do you train out of?

A: “I train out of Next Edge Academy in Sioux Falls SD, and have been for 2 years. Before that I was at Gracie Tampa in Tampa FL for 2 years, and before that I lived and trained in Washington State (where she is from).”

Q: How long have you been fighting?

A: “I have been fighting since I was 17. USA boxing at first, then pro boxing, then MMA.”

Q: How would you describe your style?

A: “I come from a boxing background. That was my first love. I actually was really opposed to MMA at first, I thought that it was just brawling, I didn’t understand the technique involved. I started training MMA because I got bored in training just boxing. Even though I train in all aspects of the sport, I still consider myself a striker, a boxing style. It’s funny that I say that because a good chunk of my wins have come from submission, so I guess I’m a grappler too!”

Q: What is your favorite part of fighting?

A: “I love how I feel after the fight is over. I don’t mean after I win, it’s not about that, it’s about what I just accomplished. What I had put my body through for weeks, what I mentally had to overcome, and the fact that I just did something that only a tiny percent of the population will ever do. Walking out of the cage feels just as good as walking into it. And of course, I like to win.”

A: “My parents. We weren’t dirt poor but we weren’t wealthy growing up. My dad and mom worked hard to make sure me and my siblings had what we needed. They instilled in me a work ethic that I am thankful for every day, and not just in training, in my life outside of the cage too.”

Q: I know you’re a busy person, training and working, but do you have any hobbies outside of MMA and work that you like to do just to relax and unwind?

A: “During a camp my hobbies include sleeping and working. I’m a paramedic and work 12 hour shifts so during my camp I have time for nothing else.  When I am not in a camp I love to be outdoors and do things physical, whether it be rock climbing, snowboarding, fishing, or anything that gets my adrenaline going. I am also a big nerd, I love to read. Genre of choice is historical non-fiction… usually about past US wars. I know, boring!”

Q: Your nickname is “Snowflake” right? Care to give us the origin story behind that?

Make sure you check back with BJPENN.COM for part 2 where Eggink discusses her upcoming title fight and what it means to be fighting on UFC Fight Pass.