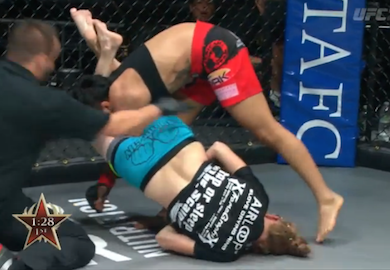 Tonya Evinger dealt with Deiane Gomes’ aggressive offense with skill and it paid off big time. Evinger secured full mount within minutes and began to punish Gomes with ground-and-pound.

As Gomes was trying to block and maneuver out from under her, she left her arm hanging and Evinger latched on to it. Evinger transitioned into a deep armbar and began to crank immediately.

It almost looked as if Gomes was going to let her arm break, but she tapped out at the last second.

Tonya Evinger def. Ediane Gomes by way of Submission (Armbar) 3:31 of Round 1