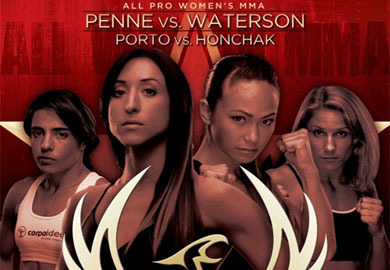 Michelle Waterson defeats Jessica Pennevia sub. (Armbar) at 2:31 of round 4 to take the Invicta Atomweight Championship.

Cris Cyborg defeats Fiona Muxlow via TKO at 3:46 of round one. (Featherweight)

Bec Hyatt defeats Jasminka Cive via sub. (Armbar) at 3:30 of round one. (Strawweight)

Miriam Nakamoto defeats Jessamyn Duke via KO (Knee) at 2:20 of round one. (Bantamweight)

Rose Namajunas defeats Kathina Catron via sub. (Flying Armbar) at 0:12 of round one. (Strawweight)

Alex Chambers defeats Jodie Esquibel via sub. (Rear Naked Choke) at 1:35 of round one. (Atomweight)