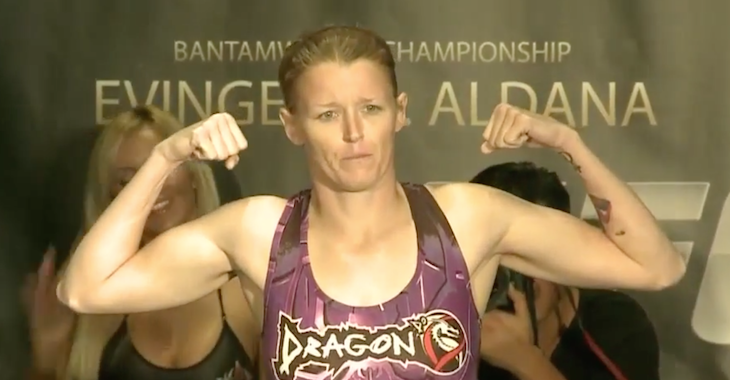 The vacant bantamweight title was on the line when Irene Aldana took on Tonya Evinger.

Fighters come out and touch gloves. They circle each other, then it looked like Aldana might have slipped. Evinger rushed in and got top position. They both threatened with leg locks and a toe hold, but they both let go. Evinger gained top position, in side half guard. Evinger gains mount. Evinger landed some hard shots from the mount position. Evinger locked up an armbar and it was tight, Aldana refused to tap. It was really really tight and looked painful, but Aldana escapes. Evinger remained on top, in half guard. Evinger again gained out and started throwing big shots, at the very end Evinger tried for another armbar, but the time runs out.

Aldana looks fresh in the second round. Evinger lands a big right hand, then moves in for the clinch. Evinger gets the takedown. Evinger really put it on Aldana. She wan’t able to do much from the bottom as far as escaping or trying submissions. Aldana took a lot of damage that round, couldn’t get off the ground.

In the fourth Aldana lands a few nice kicks to the leg and the body. Evinger eventually goes in and gets the takedown, once again she moved right into mount. Evinger stays on top and just pounds Aldana until the referee eventually stops the fight.