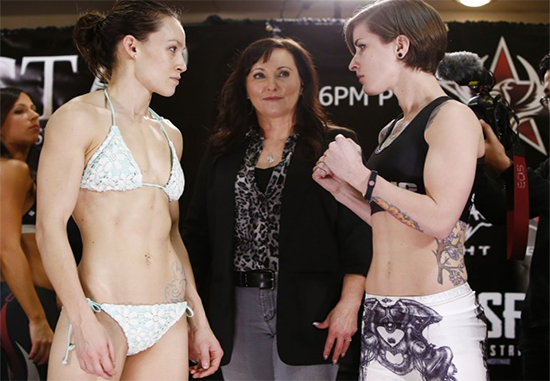 Jinh Yu Frey gave us the first finish of the night!

Frey gained back control after Robb gave it to her when they were fighting for positioning on the cage fence. Robb tried to escape by flopping on the mat, but it actually gave Frey better positioning. While on the canvas, Frey was able to lock in the body triangle and that was the beginning of the end of Robb.

Robb made it back to her feet and tried to shake Frey off who was riding her like a backpack. Frey locked in the rear naked choke and started to crank hard. It was clear that Robb was done, the question was whether she was going to submit or pass out.

Her legs gave out from under her and Frey held on to the choke on the mat. Robb tapped out and Frey jumped to her feet to celebrate her victory with her corner.