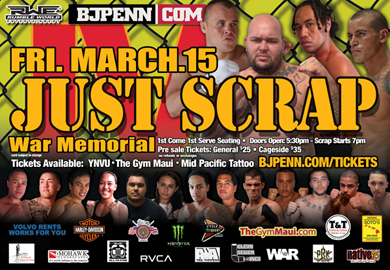 In an unfortunate turn of events, two combatants have been forced off the card due to injury and replaced with new fighters.

Riquo Abadilla, who was originally scheduled to face off with Gerald Castaneto for the ‘Just Scrap’135lb title has been replaced by the always tough Donald Gonzalves.

In female action, ‘Just Scrap’ officials were forced to seek out a new opponent for Tiani Valle, who was originally scheduled to fight Lena Cook. Cook has now been replaced by Sivada Koulthsen.

** Both Riquo Abadilla and Lena Cook have been injured and forced off the card. Donald Gonzalves will now face Gerald Castaneto and Sivada Koulthsen steps in against Tiani Valle.