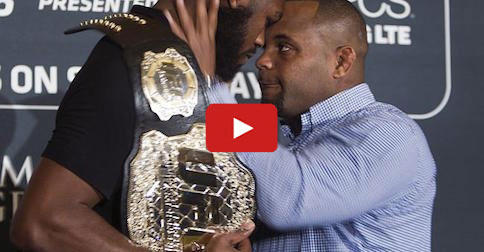 “This is what I’ve wanted for years, since I met Jon. When I met him in 2010, our first interaction was unpleasant. He insulted me, so he gave me material and I put his picture on the wall and I have been looking at it since then. I want to beat him in his prime. This has been a goal for four years.”

Cormier on how this compares to competing at the Olympics: “For a long time I thought the Olympics was it, I represented America and nothing would match that. But as I get closer to this fight, this feels bigger. So many people are watching. And the ability to make money is life changing. It feels like this is bigger.”

Cormier on if he would have been fighting if he won gold at the Olympics: “I wouldn’t be here if I won gold. I look back at how things are meant to be. I lost because I wasn’t supposed to be the champion. Those lessons were so I could learn. It all prepared me for January 3. I’m supposed to be the UFC champion. That’s why I didn’t win the Olympics.”

Cormier on what will change with Jon Jones once he beats him. “I think he falls back in the pack. He’ll get a rematch, but he’ll fall back. Once he knows he can get beat and no one is scared of him, he won’t win ten in a row anymore. He’ll win some and he’ll lose some. He’ll go searching for answers and move to heavyweight. It’ll put doubt and questions in his head. He’ll come out a different man. He might need to be convinced to take the rematch. He’ll lose to me and his career will go in a tailspin. I’m looking to rid MMA of Jon Jones.”