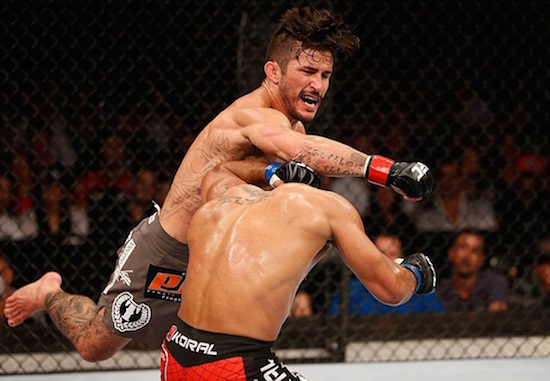 UFC flyweight Ian McCall was forced out of his UFC Fight Night 56 co-main event bout with John Lineker at the last minute.

It was later revealed that McCall had a blood infection, and as a result was pulled from the card.

Now we have more details regarding the seriousness of the infection from McCall’s interview with Ariel Helwani on The MMA Hour.

“Once I weakened my immune system with my weight cut, my body completely failed me,”

Leading up to the bout, McCall said his symptoms were minimal, but he turned down antibiotics because, I don’t like putting that stuff in body, I don’t know how this stuff works.”

However things became much more severe prior to weigh-ins for McCall.

“Usually backstage, I’ve got a lot of energy, I’m shadow boxing, it’s also a mental thing. I like to show the person that I’ve got energy in spades, cardio in spades, I’m going to cut weight, if we fought right now, I’d bury you. But I just couldn’t. I couldn’t move, I just wanted to save whatever energy I have for the stage. I went on, I made my weight, put on a little show, and then once we got backstage it just got worse, I started to drink, I couldn’t get food in, I took one bite of pineapple and I was like I need a trash can. So [UFC employee] Isabella [Hodge] brought one over. I didn’t throw up, even though I felt like it. they gave us the [pre-fight] speech and I couldn’t stand up. They had to get me an IV at the stadium, they were like let’s do it now.”

“I tried to stay positive and keep breathing and relaxing and focused. I was eating very small amounts of food, a protein shake here, a little bit of chicken and vegetables. I don’t gorge myself before the fight, I eat as healthy as I eat any other day. … I laid down and my body started steaming up. My throat, my back, my head, my hand, I had shooting pains, all the stuff, I had a lot of trouble breathing, I couldn’t really see, I had probably drank 10 pounds water, I had an IV in me, I should have felt a lot better. I couldn’t see my phone, luckily I was able to text my coach, ‘you need to grab a doctor and come up, you gotta get the doctor, I don’t feel good, I don’t know what to do.'”

McCall informed Helwani that he doesn’t remember much from his hospital visit, but upon arriving at his hotel, slept for 10-hours. During his extended period of sleep, it was determined that he was unable to compete, and as a result the bout was scrapped. Despite sympathy from everyone regarding the situation, McCall admitted he was let down that his body failed him.

“I tried not to cry to myself. I tried not to lay there and cry like a little girl. It’s depressing, it’s something you strive so hard for. I’m a machine, I can fight through this, Why? Why did my body fail me, why did I let this happen. People can talk all the shit they want, I don’t care what they say on twitter, people can say what they want, all these twitter trolls that talk shit. As far as mysef, look how much training I’ve put in. I know I’m in this good of shape. I know I’m this healthy. I know I”m this tough. I know I’m this much of a badass. How has this vehicle I’ve created failed me, why is it happening to me? You go through a whole range of emotions, I just laid there and just tried to be somehow positive about it.”

“I want that fight. I think it makes a lot of sense. I think that him trying to go around me is weird. We still have a date. We gotta dance, homie. We gotta get down, we’ve got some games to play. I get it, you don’t want to fight me, whatever stupid reasons you have in your mind. But I just think he realizes I’m a very bad fight for him. I made weight, I made 125 and I was sick. I’m going to make weight you missed weight [Lineker made weight on his second attempt] and you’re good. I think he realizes the type of individual that he’s going to have to deal with when I am 100 percent.”

From all of us here at BJPenn.com we would like to wish Ian McCall a speedy recovery.