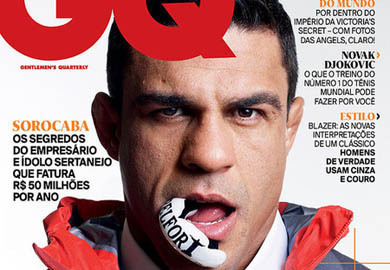 On September 22nd Vitor Belfort comes up a weight-division to face the champion, Jon Jones on just 4-weeks notice.

“The Phenom” is promising his best, and his coach, Mike Dolce, tells UFC.com where they think he has the advantage in the bout.

“The Monday before the fight he’ll probably weigh between 210 and 212. Our goal is to have him at 208. That’s my goal. Anywhere between 208 and 212. We know his body and he performs best right around that 210-pound range. I’m shooting for 208 pounds because he doesn’t have to be BIGGER than Jon Jones – he just needs to be FASTER. He’s faster than Jon at 220. At 208 Vitor is faster than most lightweights. Anyone that has trained with Vitor will tell you that he’s the fastest guy they’ve ever trained with. So we’re going to maximize power, speed and endurance at that body weight. I saw the odds – 13 to 1 underdog! When I heard about this fight, as soon as Vitor called me I said, ‘You’re going to win this fight! You are perfectly built to knock Jon out.’ Look at Jon Jones versus (Lyoto) Machida. Machida could touch Jones all day with that left hand to the jaw. Vitor is twice as powerful and four times faster than Machida. So if Machida can touch Jones’ jaw, Vitor is going to obliterate it. No disrespect to Jon, it’s just a terrible matchup for Jon Jones. That’s my belief.”