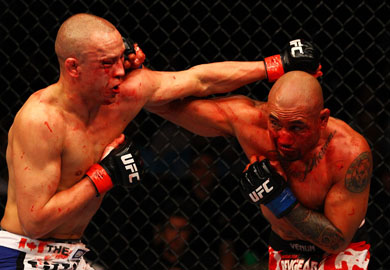 A featherweight fight between Mark Hominick and Pablo Garza is scheduled for UFC 154 in Montreal on what is shaping up to be a great card.

Hominick (20-11) will be looking to end a three-fight skid that included a knockout loss that is one of the fastest in UFC history. This fight being the third in a row in Hominick’s home country, he will attempt to get a win for his countrymen and build a streak back up to the title.

For Garza (11-3), he is coming off of two consecutive losses that have slowed his progress following two spectacular submissions by way of flying knee and flying triangle choke. Garza will have a 4 1/2 inch reach advantage as well as a 5 inch height advantage over Hominick.

Stay tuned to BJPENN.com for the latest fight card updates and MMA news.