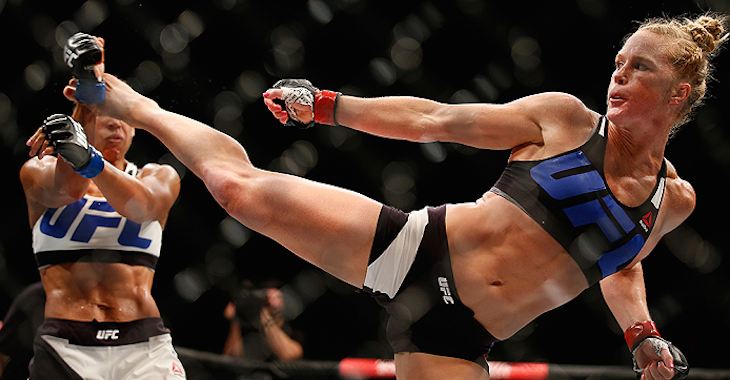 “Ronda is who she is; she’s proven herself to be a phenomenal athlete, and this fight is pretty interesting if you look at she just knocked out Bethe (Correia) – Holly is an amazing boxer, she’s southpaw. I train with Holly and she’s fast, she’s powerful and she picks things up fast. I want to stand behind my teammate. It’s almost impossible to say she’s going to come out with the win, but I do think Holly has the ability if she comes in and fights the right plan to make it a very tough fight and potentially get that win. I want to stand behind her.”

UFC bantamweight Holly Holm isn’t being given much of a chance, even amongst her own training partners.

Fellow UFC bantamweight Sarah Kaufman, who trains with Holm, told MMAJunkie that she wants to back Holm in her upcoming fight against the champ Ronda Rousey, but thinks it’s ‘almost impossible’ to pick her to win.

She did say if she goes in with the right plan, she can beat Rousey, but, what exactly is the ‘right plan’?

How much of a chance do you give Holm?